Vicarstown Takedown is The fifteenth and The Final Episode of The Twelfth Season.

After a Long Time of Deciding for Days and Weeks, Sir Topham Hatt calls all of The engines to Tidmouth Sheds to tell them if he'll keep Either Ryan or Stafford and who to send away packing. However, He Says That both Ryan and Stafford can stay on The Railway after a Long Decision Because of Proving Themselves to Be Really Useful.

Ryan hears this and rushes in with some news immediately, Sir Topham Hatt stops and listens to Ryan's news. Ryan tells him that there is a derailed diesel shunter off the tracks and that he needs to come urgently…

Sir Topham Hatt hops in Ryan's Cab and They set off to find The Accident. There just as Ryan said is a Detailed Diesel Shunter with a Strange Ballast Car Derailed as well and right at a switch track is Some Engines from The Other Railway That Sir Topham Hatt Has never seen Before minus Hiro.

Hiro tells Sir Topham Hatt that he cautioned them not to come to the Island of Sodor but to no avail. These engines did not come by Sir Topham Hatt's orders but someone else's.

Ryan tells him about the Railway Inspector and that he was looking through his office a few weeks ago. Sir Topham Hatt is cross at this and realizes that this could've been the Inspector's orders for Connor and Caitlin to come over to Sodor without any permission…

Sir Topham Hatt has no other choice and tells The Engines to stay on The Island for a little while but not long. Soon news spread all over The Island to The Yard to Where Thomas, Edward, James and Donald are ready to Take Their freight Trains.

Donald is horrified and like his twin brother Douglas says "losh sakes!" not understanding why Sir Topham Hatt would bring over two engines he hardly knows. Thomas tells him that it's just for the best and that they'll have to deal with it.

Edward and James wonder too why Sir Topham Hatt did this but they'll just have to deal with it as well.

Meanwhile By The Brendam Drawbridge, Oliver and Toad Huff along The Tracks Searching for a Suspicious site… Toad tells Oliver not to go over this drawbridge because there could be another engine there and news about the disappearance of Ben still spreads.

Oliver However tells Toad He Doesn't Care about The Engines or if there's even an engine at the bottom of The Drawbridge. He Says That This Mystery Will Be Solved and He'll Have To Solve it Himself!

Donald.
Add a photo to this gallery 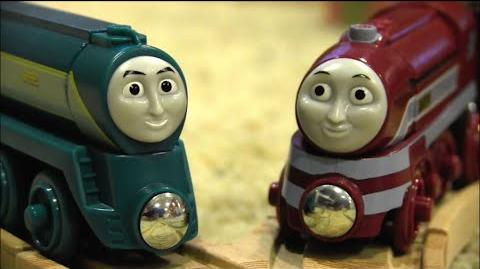 Vicarstown Takedown
Add a photo to this gallery
Retrieved from "https://keekre24andthomaswoodenrailway.fandom.com/wiki/Vicarstown_Takedown?oldid=98018"
Community content is available under CC-BY-SA unless otherwise noted.