"That branch line I wanted? Someone else can have it. I think I've finally realized the true importance of being Billy!"
- Billy

The Importance of Being Billy is the fourth episode of the twelfth season.

One morning, Billy is bragging to Gordon, Paxton and Derek that he deserves a branchline and more credit on the railway and tells them that when he took the Railway Inspector it was good.

The three engines ignore that and say that taking the Inspector around the railway isn't so good at all but Billy says that he deserves to be the Pride of the Railway and get a more pleasant job; the engines however tell him that he is only the Pride of the Coal Depot.

Billy is cross and tells them how deserving he is of a branchline but Gordon huffs away to pull the Express and when he leaves Billy decides to make the Island of Sodor a better railway and puffs away while Derek and Paxton prepare to get the Breakdown Train.

As approaching the Brown Turntable, Billy is still bragging that he can do whatever any other engine can possibly do like Gordon!

But when he goes onto the Turntable, he says that he may not be able to pull the Express like Gordon but he can spin around on a turntable and every engine on Sodor can do that but when he stops, he sees two baggage cars that are just sitting at Knapford Station and not being picked up.

Rosie puffs in pulling some passengers on board Old Slow Coach and the passengers hop out of Old Slow Coach and don't see their baggage cars which were full of important things and different sorts of stuff. Next Billy saw Trevor with a bee car he thought he should move it out of the way he did so but he had no idea that it was still in the way. Thomas then came and crashed in the bee car and the angry bees buzzed around him. (To be added) Just then, Rosie, Salty and Sir Topham Hatt arrived all three looked very cross! Sir Topham Hatt ask Billy of what has he done today, but Billy cheerfully tells him that's a quite a lot and asks him if he will like to hear about it, but Sir Topham Hatt crossly refuses. Because of this, Billy takes the baggage cars from Rosie's passengers and knock the honey car off the rails (thought that Thomas gets in his way) and stealing Salty's gift to Arthur.

Thomas and Bertie.
Add a photo to this gallery 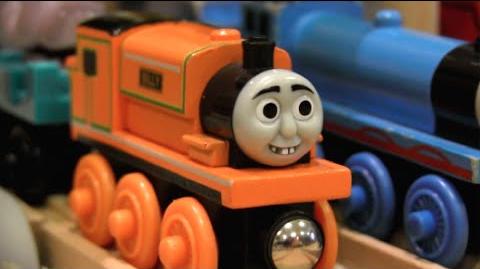 The Importance of Being Billy
Add a photo to this gallery
Retrieved from "https://keekre24andthomaswoodenrailway.fandom.com/wiki/The_Importance_of_Being_Billy?oldid=34455"
Community content is available under CC-BY-SA unless otherwise noted.