Stanley, Whiff, and the Troublesome Dumptrucks

Hudswell Clarke/Kitson No. 5459 "Austin I" hybrid

Stanley is a white tank engine who shunts the Express for Gordon at Knapford.

He is a strong silver tank engine, who is a little stronger and a little faster than Thomas. He is a hard worker, and often shunts trucks, serving as the station pilot at Knapford Station alongside Stafford, Philip, etc. He also was rebuilt by the time of Saving Pirate Ryan, due to a crash.

Stanley is a Hudswell Clarke/Kitson No. 5459 "Austin I" hybrid. 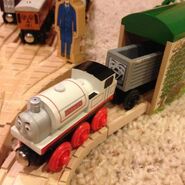 Deleted scene from Toad the Brakevan: Missing in Action.

Stanley in Duck and the Quack Attack.