Start a Wiki
Sidney Nicknamed Sid is a Dark Blue Diesel Shunter from The Other Railway.

When we first met him, Sidney was Hauled up at The Sodor Dieselworks. He also Laughed at Percy's joke.

After Percy, Takes Diesel 10 to The Sodor Steamworks with The Other Diesels, Sidney Had Been Left Behind, It is Unknown if He Survived from The fire, it is Likely That Den and Dart Helped Him out of Building Before The fire at The Dieselworks. He Later Received a New Set of Wheels from Percy and Thomas: and He was Back on Track again.

Sidney is a quite forgetful engine. He starts his day ending up at one location not remembering how he got there. Norman and Paxton are considered his best friends; as he enjoys their company.

Sidney is based on a BR Class 08 diesel shunter living at the National Railway Museum. Diesel, 'Arry, Bert, Splatter, Dodge and Paxton are also members of this class. 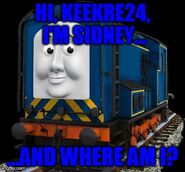 Add a photo to this gallery
Retrieved from "https://keekre24andthomaswoodenrailway.fandom.com/wiki/Sidney?oldid=103883"
Community content is available under CC-BY-SA unless otherwise noted.