A Normal Day for Dennis

Sir Topham Hatt
Norman nicknamed Norm is a diesel shunter and Dennis' twin, he is the first diesel engine who was built in 1949.

Norman first appeared in while the two workmen were trying to destroy The Magic Buffers. Norman had tried to explain stuff to Sir Topham Hatt which Sir Topham Hatt had ignored and Norman accidently pushed Rocky way fast and off the rails.

Later, Sir Topham Hatt explains about this diesel at The Diesel Sheds; where Diesel, 'Arry and Bert explain he was a spy for Diesel 10 but before they could end they're sentence Sir Topham Hatt told them not to say that name, because the keyword is message for Diesel 10 and he will come to take over the railway, but Dennis is excited about Norman and leaves the Diesel Sheds leaving Diesel, 'Arry and Bert the only diesels left in the sheds, and they were now three troublesome diesels of sodor.

Later on he appeared when Spencer found him near a "Busy Bee" livery James; he helped James through the ride. When James and Norman had arrived at Elsbridge Station Norman was hid.

Norman could've went back. But it would be no use; Spencer had explained it and Norman came out of the back of the train. Spencer is greeted and explains Norman is busted, but The Duke of Boxford is mad and asks to Spencer why he missed the train.

Spencer tried explaining but nothing could make the Duke of Boxford stop. Sir Topham Hatt crossly said silence because he has a word with a orange diesel and Sir Topham Hatt then ask Norman what was he doing in his railway. Norman explains that the other railway has been terrible and horrible and decides to go on Sodor. Norman is about to go find Paxton, but Sir Topham Hatt stops him and asks if he's "spy" Norman replies that he was for other railway or for Diesel 10, Furious enraged, Sir Topham Hatt yells: "DON'T SAY THAT NAME!!!!!!!!!!!", warning him not to bring him to destory the railway. Sir Topham Hatt also explains to Norman if he should keep him on his railway or not and when the sentence is ended he tells that James will get his old coat of paint back and asks if he can take Norman to The Diesel Sheds. James replies "yes" and there are no longer three diesels in the sheds anymore.

In Tour de Sodor, he made a cameo in the Diesel Sheds whilst the Skarloey Railway engines had their yearly "Race Around the Railway".

In the eleventh season, Paxton left for the Big City for a few days and a snooty engine came over as replacement so Bill and Ben made up a rumor that Paxton wasn't coming back and rumor catched on to Whiff who told Norman who was not seen after Paxton's Big City visit.

For the next episodes all of the engines like Henry were wondering where Norman was and didn't know how he disappeared just after thinking his best firriend Paxton's visit to the Big City.

In Claw of the Law, Norman finally made a surprise return but with Diesel 10 and the diesels on the Other Railway and when the Diesel engines escape to the North Western Railway, Norman feels sad about leaving Sodor and misses his best friend Paxton but decides not to think about him!

Later, Diesel 10 tells Norman to keep all of the "traitor" diesels in order which those traitor diesels are Daisy, Dennis, Diesel, Paxton, 'Arry and Bert but Daisy tries to convince Norman to not listen to Diesel 10's orders and come back to the good side and he eventually listens to Daisy's advice…

But after the events of defeating Diesel 10, Norman and Den had to go to the Works for a little while so they both go to get repaired.

In the twelfth season, Norman along with Den both return from the Works as they are seen at the Vicarstown Dieselworks during one of the Railway Inspector's visits to the North Western Railway and he promises all of the diesels that they will get a new Dieselworks as soon as he can give them one.

Henry chases a runaway handcar around Sodor at one point in the twelfth season and Norman sees when the handcar is derailed wondering how just one handcar can get to the Dieselworks.

Later Norman is angry with all of the diesels because the Railway Inspector's promise to giving them a new Dieselworks and after Ben's disappearance being taken away he wasn't happy for not getting the Vicarstown Oil Train for the Dieselworks until Sir Topham Hatt explained it all out to all of the diesels.

Norman is painted red orange with a yellow sleek.

Norman is based on a 11011 diesel shunter. Dennis is another member of this class.

(Norman can be seen right beside Sidney) 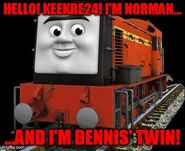