"I'm sorry, sir, but I'd thought you'd understand that any engine with coal in his bunker would run out of it in the sea..."
"You know just as well as I do that Stafford is a shutter who is never pulled trucks before!"
- Ryan and Sir Topham Hatt

Stafford's Electric Slide is the second episode of the twelfth season.

One morning, Ryan is pulling a freight train and is up to no good from the looks of it and continues along his way. Mavis tells Murdoch in the Yard that she doesn't like Ryan. Stepney said he should leave now that Duck is back Murdoch said if he sees Sir Topham Hatt he'll tell that and he went to take a goods train. When Murdoch was taking his goods train when Ryan came over Suddery Bridge and crashed into Murdoch's train Murdoch was cross with Ryan for his recklessness Ryan didn’t mean to be careless and he realized his mistake and he went to get help.

Ryan found Rocky who was helping Harvey with another accident Rocky said he was mean to the others Ryan was cross and went away. Ryan was making his way to Murdoch when Scruff was on the bridge and Rocky's crane arm knocked him off Scruff was upset so was Murdoch saying North Western Engines are typical. Sir Topham Hatt heard about the accident and said he doesn't know if he's going to keep him and that he'll have to find an engine to replace Scruff, soon Scruff's replacement arrived. Donald said he's new like Ryan and Whiff said he might be bad. Sir Topham Hatt said his name is Stafford and that he's good at shunting and he was and amazed everyone even Scruff. Scruff said he can work in the Yard and he can help Whiff and that Ryan has been rude lately Ryan overheard and was cross about his behavior. He went to see Diesel he said he needs his help and that he's the wisest engine Diesel was surprised he thought he could knock him off the rails, and Ryan thought that was great leaving Diesel about to have his doubts. Ryan shunted cars for him then Stafford arrived he pretended at his ill and Stafford said he'll take the cars just as Stafford was coupled to the cars Ryan whispered to push Stafford they agreed.

At the docks Victor's boat was getting ready to leave Neville said not get caught by the wave then Stafford rattled as the trucks pushed him in the sea. Neville said to watch out for engines Sir Topham Hatt was surprised to see Stafford with Ryan's train. That evening Sir Topham Hatt spoke sternly with Ryan for making Stafford splash and make his battery die. Ryan pretended not to listen but he knew it was all going to be too much for him that day..

Add a photo to this gallery 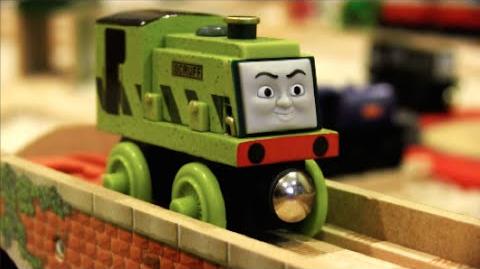 Stafford's Electric Slide
Add a photo to this gallery
Retrieved from "https://keekre24andthomaswoodenrailway.fandom.com/wiki/Keekre24/ThomasWoodenRailway_Wiki:Stafford%27s_Electric_Slide?oldid=100535"
Community content is available under CC-BY-SA unless otherwise noted.