If The Dome Fits is The Eleventh Episode of The Twelfth Season.

Montague (a.k.a. Duck) has just returned from The Works and is Pulling Some Knapford Express Coaches Onto The Turntable But His Return isn't so hot Because of his friend Oliver not working on The Little Western with him and Ryan taking his place instead, The Reason is Oliver is Helping Percy and The Pack with The Ulfstead Project!

Duck is in a bad mood due to the Inspector's review and Oliver working at Ulfstead and huffs away angrier than ever and meets Ryan at a switch track. However, since the two engines haven't had a good introduction with each other when they first met: Duck is not happy with Ryan who is just trying to have him take some Troublesome Trucks. But Duck is not doing things the Great Western Way and decides to take both the Knapford Express Coaches and the Troublesome Trucks at the same time but Ryan warns him that he doesn't think the passengers will appreciate the flying stone at their windows…

After the Troublesome Trucks are delivered by Duck, his next job is to take the Sodor Coal Company Cars and he stops at a station and Ryan says that he'll help Duck some way but Duck refuses Ryan's help and huffs away taking the coal cars with him.

Ryan goes up to a switch track where Stanley is and tells him that there must be a way that Ryan can help Duck somehow and Stanley tells him to just keep huffing along to follow Duck.

Duck huffs along the Sodor Suspension Bridge pulling the coal cars and trying to make the delivery on time but danger lay ahead when the Railway Inspector is just walking on the tracks not concerned about anything. The Inspector sees Duck coming through but doesn't do anything and Duck veers onto a switch and into a shed! The Inspector then says why Duck would go through and complains about the bad accident. Butch the tow truck is on the ground and tells him that he was the one that caused this accident and there's nothing that he should be complaining about and Butch is very cross at this fact.

A few minutes later, Ryan arrives with Sir Topham Hatt onboard while Billy brings in the Breakdown Train to clear up Duck's terrible accident whilst Butch helps out. When Sir Topham Hatt sees the Inspector, things are going bad when he asks him about the cause of Duck's terrible accident and the Railway Inspector tells him it's just usual for Duck to get into an accident and stops talking. However, Butch still saw everything with his own two eyes and tells Sir Topham Hatt that the Inspector caused the accident and this time it wasn't Duck's luck. Then the Inspector insults Butch saying he did not see everything and mistakes him for a different vehicle but Butch tells him he is a tow truck with a breakdown crane making it a complete difference…

After Ryan clears up Duck's accident and pulls him out of the shed, the two engines easily befriend each other and Ryan shunts Duck in the Yard on a cargo car.

Duck and Ryan become friends but it is also time for Duck to go to the Works again and Duck tells Ryan "If The Dome Fits, wear it!" and Ryan chuckles and calls him "Mr. Waddle Wheels" but Duck knows this time its only just a joke. Arthur picks up Duck on the cargo car and he sets off for the Works and though Ryan and Duck have now found friends in need, Duck has to set off to be fixed again and they will miss each other very much.

Butch.
Add a photo to this gallery 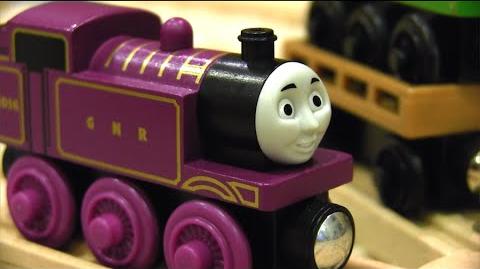 If The Dome Fits
Add a photo to this gallery
Retrieved from "https://keekre24andthomaswoodenrailway.fandom.com/wiki/If_The_Dome_Fits?oldid=110680"
Community content is available under CC-BY-SA unless otherwise noted.