Start a Wiki
Harvey's Second Chance is the fifth episode of the ninth season.

Harvey was feeling very sad and wonder if he could be a really useful crane engine. The engines felt sorry for Harvey Thomas, Gordon, and Stanley were watching him at the yard and could see that Harvey was not happy. Thomas, Gordon, and Stanley, are discussing about Harvey. However then, James appears and tells them while the three remarks about Harvey and James tells about time that Harvey gets out and stretch his wheels and calls him a chubby but he said it to the engines. That sent the engines overboard and they all furious and leaves after James says inappropriate things. James laughed to himself and calls three of them that it's the truth, but they did not listen, and then, James puffed away proudly.

James was supposed to pull a special train in the afternoon at 3pm and depart from Knapford station in the opposite end and deliver the train to Gordon at Tidmouth station. However, James forgot about it and ended up coupling himself to the wrong end of the train. James decided to take a nap.

The stationmaster and the guard were annoyed that James had yet to appear in the front of the train. The train was carrying a VIP (Very Important Passenger) and it cannot be late. Since Harvey was sitting in the yard, they decided to recruit him to help pull the train. Harvey was lucky that his driver and fireman showed up that day and soon he coupled up to the train. This was Harvey's first attempt at pulling the coaches and he got some advice from the stationmaster about not bumping the coaches too hard. Unbeknownst to Harvey, James was coupled up to the back of the train who had just woken up from his nap and had to go. Too bad Harvey was pulling the train in the opposite end dragging James along. Eventually, James was able to break away and slide right through the station while Harvey happily rode off to Tidmouth station.

James tried to chase after his train by reversing, but the guard stopped him and revealed on page 712 of the Sodor Railway Rules and Regulations Rulebook that "a tender engine cannot proceed backwards as it is dangerous and also illegal." James was furious and proceeded to find a new route to Tidmouth station.

Harvey had just pulled into Tidmouth station and meets up with Gordon and Sir Topham Hatt. When asked about why Harvey was pulling the train and not James, Harvey explained what happened. Sir Topham Hatt noticed the VIP and quickly went to the coach to talk with her. Shortly after, Sir Topham Hatt returned and explained to Harvey that she was happy with the service and would be more than happy to revisit Sodor again.

Just then James showed up and angrily called out Harvey for taking James' train. However, Gordon revealed that James forgot about his instructions. Sir Topham Hatt commended Harvey for carrying out his duties and punishes James by having him spend a week in the yard shunting trucks. James left embarrassed.

Harvey was about to explain his predicament but Sir Topham Hatt revealed that he and Gordon were discussing about Harvey's problems. Sir Topham Hatt assigned Harvey on rescue duty if there was an accident on Sodor and apologized for leaving Harvey stuck in the yard. Since the train has to be delivered to the next destination, Gordon decided to let Harvey pull the train. 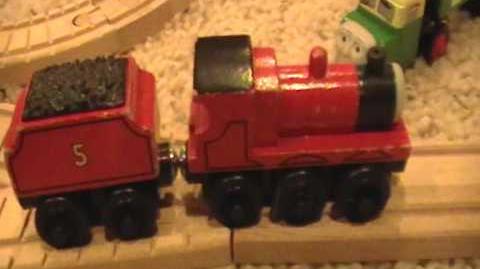 Harvey's Second Chance
Add a photo to this gallery
Retrieved from "https://keekre24andthomaswoodenrailway.fandom.com/wiki/Harvey%27s_Second_Chance?oldid=94327"
Community content is available under CC-BY-SA unless otherwise noted.