Frank and the Trucks is the eleventh episode of the first season.

One day, Frank was talking to Cranky at the Docks, but then, trouble begin, Duke was being troubled with trucks and they pushed him to the siding and crashed off the rails! Frank teases Duke about being tricked by those trucks. When Duke ask him to go get help, Frank still naughtily and rolls away, without doing anything. S.C.ruffey and the trucks learns that Frank was mean to Duke at all since he was very old, and so the trucks vows to pay Frank out. Soon, Frank arrives at Elsbridge station and he set off immediately. When he was going down Gordon's hill, the trucks pushed him down so fast right past Tidmouth Sheds causing Frank to crash into Percy's milk train! Frank had hit Percy's milk train so hard that it underneath him and Percy was very cross with Frank for causing so much crash and Annie, Clarabel and Henrietta had to agree. While waiting for the breakdown train, Frank learns that irony cause so much confusion and now Frank will never to tease and mean the engines ever again. 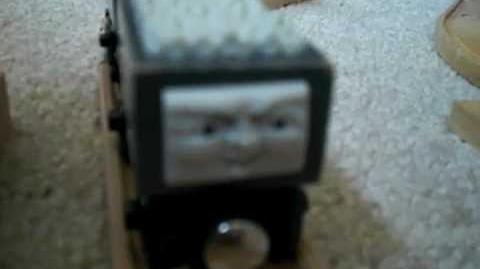 Frank and the Trucks
Add a photo to this gallery
Retrieved from "https://keekre24andthomaswoodenrailway.fandom.com/wiki/Frank_and_the_Trucks?oldid=129633"
Community content is available under CC-BY-SA unless otherwise noted.